How do you go about securing a library?

The award is given every four years to a city that demonstrates the belief in the transformational power of culture.

Set up by the Department for Culture, Media and Sport, the initiative aims to make Hull a cultural destination for must-see events.

From the 3rd January to 28th February 2017, Hull University is hosting “Lines of Thought – A British Museum Touring Exhibition”.

Dubbed ‘the greatest gathering of artistic talent Hull has ever seen’, this exhibition examines the process and practice of drawing, illustrated by a selection of work created over 500 years.

Work of great pioneers of art, such as Michelangelo and Rembrandt, will be showcased in what will be an important event for Hull.

The artwork is due to go on tour after this exhibition is over at the end of February, and won’t return to the UK for another 10 years.

In the past, exhibitions at Hull University have attracted around 600 people.

From the beginning of January to mid-February, the exhibition had drawn in crowds of over 11000 people, with many travelling far distances to visit.

Going forward, an exhibition is to be held at the gallery in May.

A collection from the National Portrait gallery will be on show, and although not as high value, it still helps the Department for Culture, Art and Sports aim of making Hull a cultural destination.

The collection on view is a collection from the British Library, with a combined value of above £35million.

Housed in the Brynmor Jones Library, the university was tasked with upgrading security to make sure the precious masterpieces were kept safe.

CHALLENGE: Securing a Library from theft and vandalism

The design specification the contractor was tasked with was securing a library without compromising the overall aesthetic feel of the building.

Replacing the windows with stronger glazed glass would incur a large cost.

It would also cause disruptive building work to the front facade of the library, which is not what the university wanted.

Security shutters, however, were a logical choice as they could be fitted discretely but still maintain security levels.

SOLUTION: How Charter Global helped to solve the problem of securing a library

Charter Global were recommended through previous work with the Arts Council and the Government Indemnity Scheme (GIS) through their experience of securing high-value galleries.

They were contacted by the university to create security shutters that could be integrated into the fabric of the building.

Hull University’s objective was clear: they wanted a secure system to protect their artwork from opportunists and pre-planned attacks, without intruding on the feel of the gallery and to meet the GIS requirements.

Obexion SR4 level security shutters were most applicable for securing the library.

These include: disc grinders, power drills, jigsaws, sledgehammers and axes.

To disguise the mechanics from visitors the gallery, motors and shutter boxes were hidden in a fake beam.

They were designed to look like part of the structure which meant that the shutters were hidden when raised.

The University chose a white polyester powder coat finish from a wide range of available colours to fit in with the building.

Additional security was also installed, which along with the shutters included vibration detectors, alarms and CCTV, ensuring that the collection of art is completely secure.

The team here at Charter Global are very proud to have been involved in such an exciting, important project.

We understand that securing a library to GIS security levels is difficult – the security must be faultless.

The gallery is now secure without any aesthetic issues. This project worked so well partly because of the employment of an arts council security consultant.

The contractor on-board was able to manage the requirements efficiently and the challenge was dealt with correctly.

Libraries are only one of a wide repertoire of specialist buildings in which we have experience in installing security shutter systems.

If you require a bespoke security system solution for your business premises, you can get in touch with an experienced team here at Obexion on: 0845 050 8705.

Alternatively, click below for more information on securing a library. 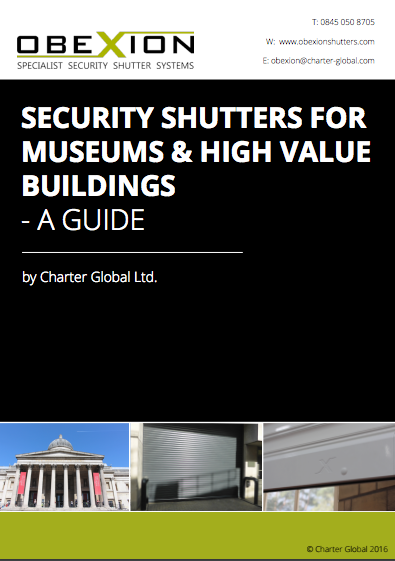