A luxury home in the heart of London’s prestigious Notting Hill has recently undergone a comprehensive renovation.

Charter Global were contacted due to their experience in fitting London security shutters.

This particular project needed an extra high-level of security, as this is not the owner’s main residence, and was vacant for significant periods of time.

Domestic window security shutters were the perfect choice for this particular project.

Two Equilux Built-In Shutters and seven Equilux Bolt-On Shutters have been included within the building design and installed to all basement and ground floor doors and windows.

They were chosen by the architect for this high spec property due to their ability to be completely concealed when open.

With many renovation projects, it is often a challenge to incorporate the security shutters into the build so they are concealed when in the raised position; there are two main solutions to this scenario.

When the new opening is created within the existing wall, extra space is created to allow for the structural roller shutter lintel above the window height.

The lintel is then installed to support the structure above the new opening and is bricked in as any standard lintel would be.

The shutter side guides are concealed within the finished wall construction for internal shutters as in this project.

The shutters themselves are then installed at a later date towards the end of the project program.

Secondly, where shutters are required to existing openings, as in this project, the Equilux Bolt-On shutter system is used.

The components of the system have been developed to ensure a very minimal rolling diameter at high level.

This enables the shutters to be incorporated within a ceiling void or within the finished wall construction, as is the case for this property.

The design area for the roller shutters was accommodated above the openings and the shutters were installed within this void.

The shutter guides are concealed using the same manner as the Equilux Built-In shutter system.

As can be seen below, the shutters are invisible when in the raised position, and when lowered create an effective yet unobtrusive security solution.

Opening with security shutters, prior to installation

If you’d like additional information on London security shutters, we’ve also created a guide which you can download for free below. Alternatively, why not give us a call on: 0845 050 8705. 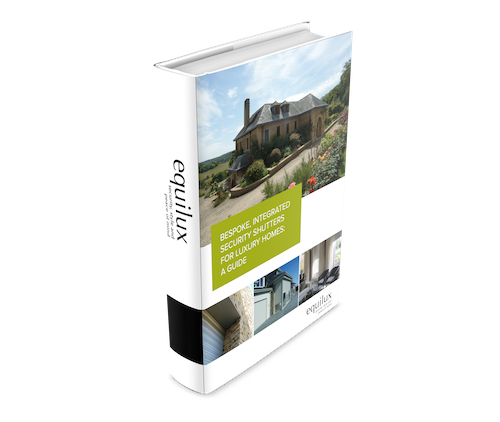